As you’re likely aware, PegHub is expanding to the Avalanche Blockchain with a new seignorage protocol.  We are finalizing the launch plan, including which coins our users will be able to farm.

We expect to launch the new website on August 23 with Genesis farms launching one week later on August 30 followed by all four autovaults being farmable on the PegHub app on August 31.  We will spend August 23 – 29 executing a massive marketing plan targeting existing AVAX hodlers and users of various Avalanche protocols, generating hype for our Genesis farms.  We have some top-tier influencers lined up as well as a large marketing spend for banner ads on Avalanche-specific sites.

Did we mention all revenue from our Avalanche protocol also feeds into the PegHub revenue-generating auto-buybacks?  I’ve been saying it for a while, but being able to buy PHUB at anything less than 4 digits is an absolute steal!  I’ll link back to this BOMBshell Monday at the start of 2023 once we’ve launched on all 4 expansion chains for a fun “I told you so”.  NFA

The main focus for PegHub is ease of use – allowing those new to crypto to earn high yields without needing to understand dApp’s, DeFi, wallets, etc. (I know, it almost doesn’t seem fair considering the time we’ve all spent learning and researching, but we want everyone to succeed!)

The largest improvement coming this week is the zap feature!  Users can now zap into any of our autovaults with whichever token they want to start farming whichever crypto they want.  This eliminates the need to swap into a token first and, in our continuous goal to make the process as simple as possible, removes 3 clicks and an entire step for new users.  Not only that, but those using our fiat on-ramp to purchase their BNB can now get into the autovaults easier too:  Step 1) Buy BNB with fiat.  Step 2) Enter autovault!

You’ll also notice a new series of videos also designed to guide those new to crypto.  The first one will be live on the site within a couple of days.  They are professionally created and will really help users navigate the site and understand how to use everything within it.  Let us know what you think, and let us know what other videos you’d like to see at our forum!

We are also finalizing an entire UI redesign.  We’ve noticed that we are driving a lot of traffic to the PegHub App, but those people may not know what to do once we get there.  Our new UI, along with the other improvements above, will significantly increase our visitor conversion rate.

The Next PHUB Governance Vote – Adding To PHUB/BTCB Liquidity Pool

PHUB is our revenue-sharing & governance token with an extremely limited supply of only 10,000 tokens.  As a reminder, the developer allocations from all our protocols (including ones we’ll launch in the future!) have been repurposed to benefit our PHUB holders through automatically buying back tokens on the open market and redistributing those PHUB tokens to those staking in our PHUB autovault.

With its incredible tokenomics, unsurprisingly we’ve seen significant price appreciation since its launch in June. However, liquidity has remained low ($72k at the time of writing) meaning reasonably small trades can have large price impacts. This is because although the PHUB/BTCB liquidity pool offers strong returns, it’s not been a popular choice due to the fact that as PHUB appreciates, it’s naturally sold to BTCB to keep the pair balanced. With PHUB being such a scarce asset it’s understandable that many simply don’t want to give up any of their tokens!

In summary, currently 100% of revenue is being used to buy back PHUB and deliver as staking rewards. The proposed would use 45% to add liquidity (22.5% buying PHUB, 22.5% buying BTCB), with the remaining 55% still buying PHUB for staker rewards.

With our expansion to 4 new chains in 2022 and more to come in 2023, we expect to significantly increase protocol revenue and therefore, now feels like the right time to propose this change.

We’d love to know your thoughts so please do come and join the discussion in the PegHub Forum.

We have some very exciting announcements regarding NFT’s! This is the ultimate teaser as we don’t want to spoil the surprise, but join us at our AMA’s this week to get all the details, ask questions, and find out what we have in store. We’ll discuss utility, where to buy, and maybe even give a quick sneak peek at the new set.

Love PegHub as much as I do?  Be the first in your city to show off your new PegHub swag – an easy way to show your neighbors you’re on the forefront of technology and investing. The PegHub Merch Store has officially launched and we love seeing all the orders coming in.  Get yours today! 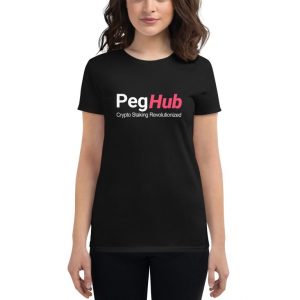 You’ll start noticing our team also wearing PegHub swag in our AMA’s – come check them out!

I look forward to seeing you at our weekly AMA’s Wednesday (12pm EST on YouTube) and Friday (1pm EST on Twitter Spaces).